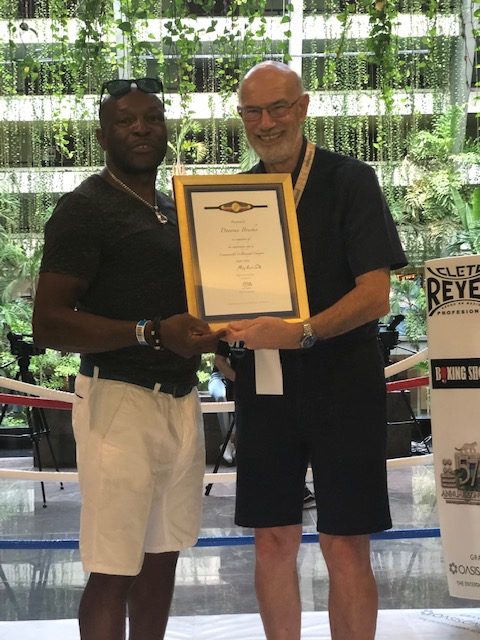 DONOVAN BOUCHER was awarded with a certificate whilst attending the WBC Convention in Cancun, Mexico by CBC Director Mr Eric Amit 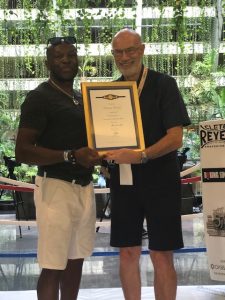 Donovan Boucher is one of Canada and the Commonwealth’s greats, with a 23 year career in the ring starting in 1985 and going on to compile a record of 33 wins with only 7 losses.

He was first a Canadian Champion at Welterweight which he won in 1987, never losing that Title in the ring, and defending it 4 times before defeating British star, Gary Jacobs for the Commonwealth crown in 1993 in Britain. He defended our Title 5 times in both Canada and Britain including a win over the talented Kirkland Laing, who had defeated Roberto Duran.
The Brits finally got their revenge when he lost the Commonwealth crown to Eamon Loughran in 1993.

Donovan’s only World Title opportunity which he lost, came against Cresanto Espana later that year but it may well be that by then his best years were behind him.

He took a break from the sport but came back with a win in 1996 and promptly retired again. Eleven years he later in 2007 he decided to give it another go but after 3 wins and 2 losses he finally hung his gloves up in 2008.

It may well be that Donovan falls into that category of being ‘too good for his own good’ and had a World Title opportunity come earlier in his career he may even have captured that ‘shiny Belt of gold and green’.
It is good to see him back in the ring as a WBC Referee and Judge and the Commonwealth Boxing Council wishes him a long and successful career in that capacity.

The Past Week in Action 8 February 2022 Highlights: -Jesse Rodriguez springs a massive upset as he outpoints Carlos Cuadras...
Read More