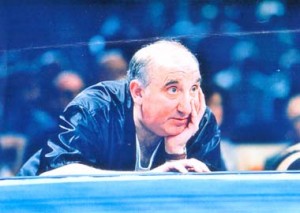 The late Dennie Mancini (1933-2004) was one of the best known figures in the sport and had a role to play in the careers of some of the greatest Commonwealth Champions from the 1960’s onwards including Lotte Mwale and Chisanda Mutti of Zambia,Lionel Rose, Johnny Famechon, Lester Ellis and Paul Ferrari of Australia,Franco Wanyama of Uganda, Lloyd Honeyghan,Billy Hardy and Billy Schwer of England, Gary Jacobs of Scotland and Howard Eastman of Guyana (to name a few).

As well as Britain and the rest of the Commonwealth he also had strong links with Italy, Holland and Germany, playing a substantial role in the career of German idols Henry Maske and Rene Weller.He held licences as a Promoter, Manager, International Agent and Second.In later years he established a reputation as a cornerman and cutsman of the first order, and Nigel Benn credits him as being the motivating force behind his historic and ultimately tragic win over Gerald McClellan in 1995, after surviving a first round knockdown and shellacking.

He became a member of the old Committee after its reconstitution in 1972 firstly as an adviser on behalf of Australia and later as a Director on behalf of the Australian National Boxing Federation, rarely, if ever, missing a meeting and then only as a result of the illness that eventually cost him his life.

He was also a Director of the iconic sportswear company Lonsdale, and their Beak St headquarters was a well known place to drop in for a chat, where you might run into not only a famous boxer, but stars from other sports and showbiz.

A formidable opponent but a steadfast friend Dennie was one of the great characters of the sport in the latter half of the last century and the beginnings of this, and his considerable contribution to the Commonwealth Boxing Council represented only a fraction of what he gave to boxers and boxing.The Directors could not let his passing go unmarked and instituted the ‘Dennie Mancini Trophy’ which is awarded each year to the person deemed to achieved the most in that year to the aims of Commonwealth Boxing.The trophy takes the form of a bronze bust of Dennie sculpted by artist Tanya Petersen of Creative Spiral, herself coincidentally a relative by marriage of former Empire Heavyweight Champion, the great Jack Petersen of Wales.

2008   AZUMAH NELSON (GHANA) Former Commonwealth and World Featherweight Champion, and all time great, for the setting up of his charitable   organization in Ghana to assist disadvantaged youngsters

2010   RICKY BURNS (SCOTLAND) for his against the odds win for the World Championship over the favoured Champion, Roman Martinez in one of the ‘fights of the year 2010’.

2011   JOSEPH AGBEKO (GHANA) for winning, then regaining the IBF World Bantamweight Championship, before controversially losing in circumstances which forced a rematch.

2012 CARL FROCH (England) for his successes in the Supermiddleweight ‘SUPER SIX’ Tournament and for capturing the IBF Title.

The Past Week in Action 8 July 2022 Highlights -Vergil Ortiz stops Michael McKinson to hold on to his No...
Read More